All human beings go to the astral dimension while the physical body is sleeping. It is necessary to learn to do this process in a conscious way and to bring back our memories when we return to our body. Astral experiences are very important in people’s spiritual development.

Hercolubus or Red Planet, written by V.M. Rabolu, is a book that anticipates for us the most imminent forthcoming events.

[EN] Due to the interest arisen amongst readers worldwide, Hercolubus or Red Planet, has already been translated into numerous languages and distributed in more than sixty countries.

In this small book, its author explains with impressive clarity several highly important current topics, from the controversial nuclear tests in the ocean and their dreadful future repercussions to the much discussed question of the existence of conscious beings in other planets in Universe.

Similarly, he states with a direct and revealing language the existence of a huge heavenly body six times bigger than Jupiter called Hercolubus or Red Planet, which is silently and alarmingly approaching Earth. The author explains in his book not only the consequences of such an approach to us, but also the true origin of climate change and the great geological activity that is taking place deep down on the seabed.

Based on his direct and conscious experience, V.M. Rabolu teaches us in his book the systems of elimination of psychological defects and the techniques of Astral Projection as the only existing formulas to escape the forthcoming cataclysm.

Hercolubus or Red Planet is written above all, with a great dose of sensitivity and love for humanity. It has already been praised and recognized amongst many of its readers as a work that casts light upon the current uncertainty through which our planet is currently going. 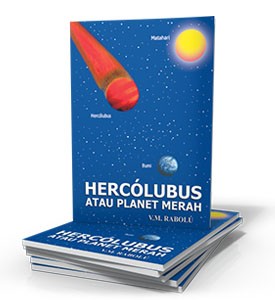